Well, it's officially August, which means any day now, we'll have Halloween candy shoved in our faces when we walk into the grocery stores.  My mom actually told me the other day that she saw it in the Giant already.

I do love fall and Halloween, though.  Mostly I like the fall fashions - I get to wear my skinny jeans and riding boots again after a hot summer - but if I could, I'd move south in a heartbeat.  The winters just make my entire body hurt straight through to the bone, and quite frankly, I'm over it.

But that's neither here nor there.

What is here, is a new Prairie Schooler Halloween graph that's TOTALLY cool.  It's a chart of smalls, and each one is cuter than the next.  It's called Boo Moon.  And I love it.

Being the former owner of a small black panther a black cat, naturally, this had to be the first one I stitched. 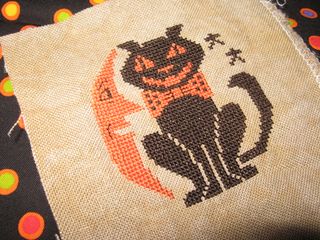 The best part about these smalls is you only use two colors - the dark brown (3371) and the orange (937).  Only one uses a third color, which is a yellow (729).  I decided to stitch these on 32 count Ale by Picture This Plus, instead of the cream/white that's called for in the graph, which helps add to the creepy feel of each small.

Because no black cat is seen on Halloween without a witch close at hand, this one clearly had to be next ~ 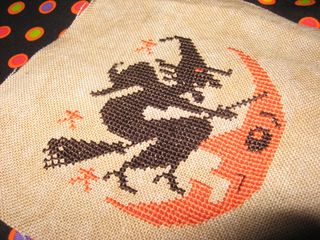 So great.  Love her cape blowing in the wind as she scares the crap out of the moon.

Have any of you picked up a fall/Halloween piece to stitch??  The season will be here before you know it!!!