Bob:  Must be very Vermonty this time of year, all that underwear.
Phil: I guess I should take the electric blanket back.
Bob:  Where you keeping that?
Phil:  Under the underwear....
White Christmas

So.  Here we are, fully entrenched in the Christmas season (with only 4 days left!!!  eeeeeek!!!).  I've been dreaming about gingerbread and shortbread cookies all day, every day.  I mean, gingerbread, you guys.  To die.  And you can only have it during this time of year.  I'm all about Christmas in July and all that jazz, but gingerbread in the middle of summer when it's Africa hot out just isn't the same as when you're curled up on the couch under throw blankets binge watching all your favorite Christmas movies.

Wait.  Africa hot.  Kinda like it is now.  I don't know about where you guys are, but it's been straight up warm around these parts.  Aroundabout now is when we start hitting temps in the 40's (which is when I start to cry, quite frankly, because I hate the cold like whoa), but these past couple weeks it's been in the 60's.  Last weekend, when I went home for my nephew's 1st birthday party, it was a balmy 73 degrees.  73!!  On December 13th!  I was sweating, windows down, for the 3-hour drive north.  Sweating.  And not because it was freezing outside so I had the heat cranked to 90 degrees in my car.  Not that I actually do that or anything.....

Anyhooter.  As expected, I'm a teensy bit behind already on my December Daily album.  I just haven't done anything particularly Christmassy yet.....except finish my cards, plan out my cookie baking extravaganza, and listen to vintage LPs.....so, long story short (too late): I'm boring.  Well, so far this Christmas season, I've been boring. 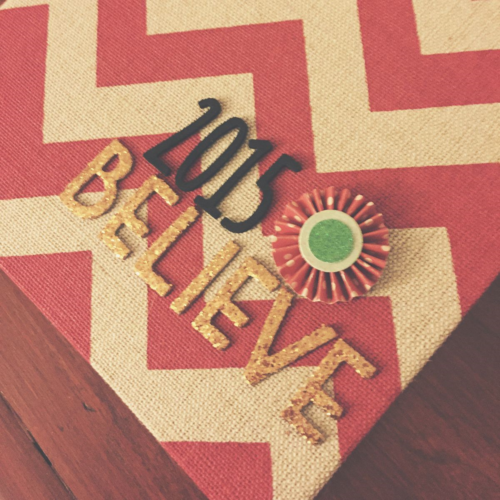 One of my Christmas travel mugs from Starbucks back in the day.....BROKE.  I can't even explain the devastation.  It had pretty foil paper on the inside, and it was just so festive and fun, and you can't get them like that anymore.  Tears were shed.

Ok, maybe not even that, but more like me saying, "SON OF A BIOTCH!" when it happened.  The latter is probably the most believable of all presented scenarios, and may or may not be what actually happened. ("Would you believe....twice around the bathtub?"  NAME THAT TV SHOW!!! <---- i really, really need to lay off the caffeine...)

On the upside, I get to treat myself to a new Christmas travel mug! I was holding off, because, let's face it, my mug collection is out of control.  But, I'm replacing a broken one, not adding to the mug hoarding mess!  #winning

Since I've been majorly slacking on my December Daily (other than to adorn the cover, as shown above), I figured I'd give you a WIP update on the Christmas stitching I've been doing instead.

First up is the Joy Quaker Sampler.  This shot shows the entire left side, which is tough to get in all the pics I take, since this piece is turning out pretty big, despite the fact that I'm stitching on my favorite 40 ct madness... 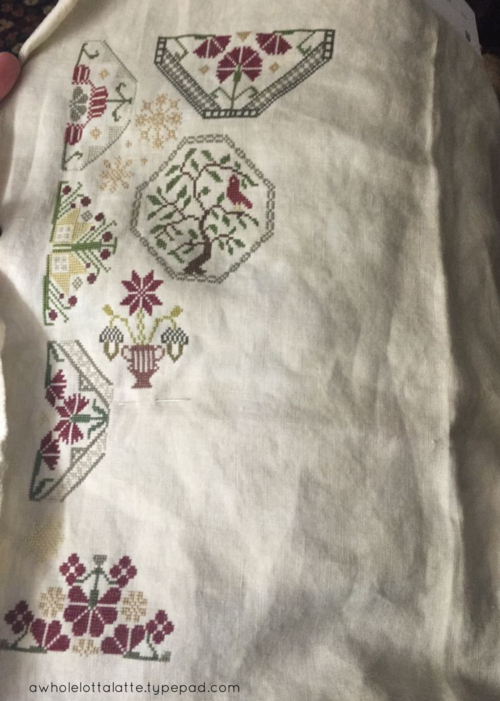 I apologize for it being a smidge dark...

This next one has a bit more stitching in it, and you can see additional motifs across the top.  The colors showed up a bit better in this one, too.  I'm loving how this is turning out. 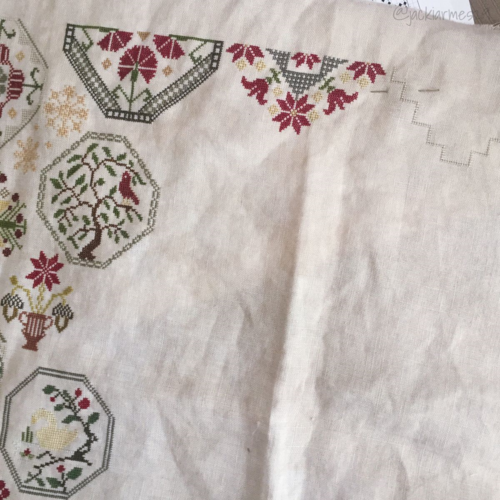 I got a bit bored with that this past weekend, even though I was in full hibernation mode and didn't leave the apartment much, so I started on something a little smaller to give me a sense of instant gratification - the next day in the 12 Days of Christmas - Second Day - from Plum Street Samplers.  A bout of insomnia and one Christmas movie later, viola! 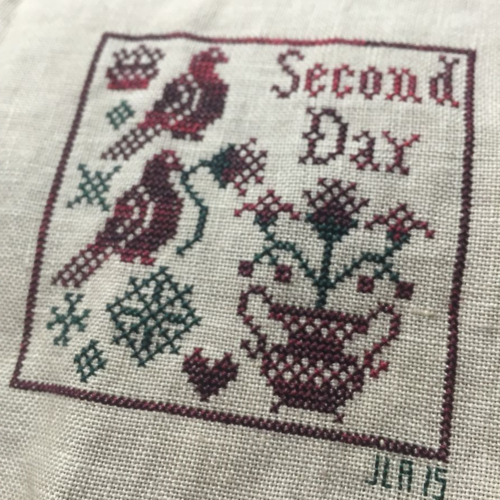 Like with First Day, I used Currant and Blue Spruce to stitch these ornaments.  I'm trying to use up my scraps, though, so I used a different fabric than for First Day.  This one is 36 count, and is definitely a WDW fabric (although I don't know the color name), which I loathe, but whatever.  I need to use up my scraps, so I suffered through it.  Anyone else out there hate WDW fabric as much as me?????  I cannot stand how limp and lifeless this fabric is, and the weave is so loose it drives me insane.  UGH to the UGH.

Tonight there will be binge baking and hopefully some DD album building before the big day arrives this Friday!  Are you guys ready for this??  I'm so not.  BUT - thank God for Amazon Prime - I didn't even leave the couch on Saturday (ok, I did for mass....4th sunday of advent and whatnot....) and was still able to order the last of my Christmas gifts, which will be arriving tomorrow!  Queen of Procrastination at her best, my friends.

Hello my friends!!  Did you all have a fabulous Thanksgiving???  I hope you did, filled with friends, family, good food, and even better wine.  Or maybe some mulled spiked cider instead.  Or maybe both.

We spent the Thanksgiving holiday at my sister's house, where she had the prettiest table set, and fantastic food for us all to eat. 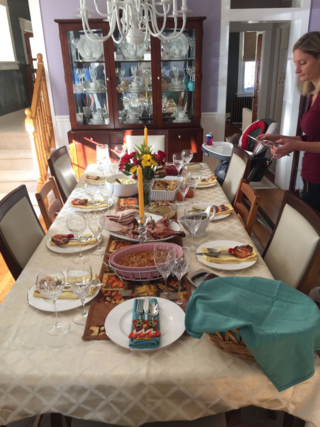 After the ridiculously delicious dinner, it was time for dessert, of course.  Since my sister's birthday fell on Thanksgiving this year, and my mom's was Saturday, and my bro-in-law's was last Sunday, I had some serious baking to do.  I made a three-layer apple cider cake for my sis & bro-in-law, and a Hershey's special dark chocolate cake for my mom.  There was the obligatory pumpkin pie, too, but....cake.  Filled to the brim with gluten and sugar, per my sister's request.  Ha. 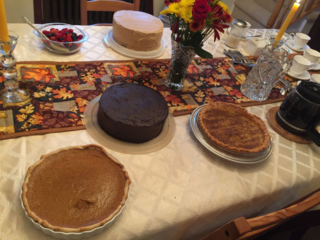 If you know anything about me...at all...you know my seat at this dessert table was the one with that coffee pot at my right hand.  Duh.

Black Friday was spent in downtown Philly, doing the tradish Christmas stuff down there, like seeing the light show in the old Wanamaker's building.  I am eternally eight years old when I see this show. 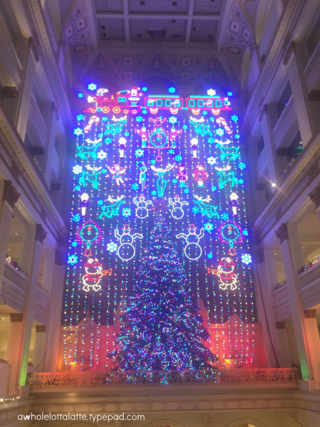 I live for this time of year, but it's still nearly impossible to believe that Christmas is right around the corner again already.  I'll be doing another December Daily album like I have the past two years.  I will do my best to provide regular post updates as I build my album, but bear with me as I finish making my Christmas cards and start prepping cookie batters - I may fall behind some days.

You're all shocked, I know.

It's like I get distracted by shiny objects or things I unearth in crevices in my craft table or start a new cross stitch project when I have three going already or something like that instead of finishing blog posts.  Not that any of that ever happens.  Ever.

Pardon me while I go find my mug of mulled cider...wherever it is I left it....and curl up to watch some Christmas specials...